Earlier in the year I was approached by Dane's kindergarten (Christopher Rawson Penfold Kindy) to make a quilt about water conservation. It's a wonderful preschool, which really involves the families and I was more than happy to help out in such a fun way. 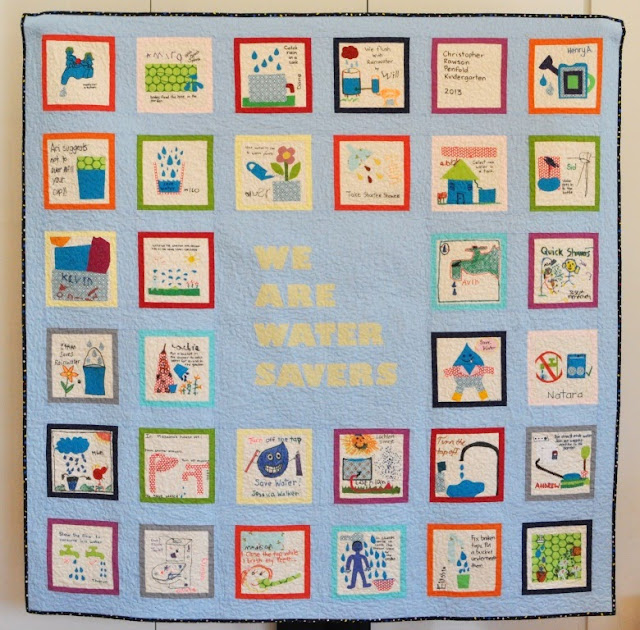 First of all I cut out 32, 6.5" plain squares and ironed double sided adhesive to the back of some bright fabric scraps (including some favourites from Umbrella Prints). Each family was given a plain square, some paper backed fabric scraps, fabric pens and an instruction sheet (if anyone's interested in the instruction sheet I wrote you can email me and I'll send it through to you.) Each day a few families were given packs and asked to return their completed square the next day.  I was so impressed by what came back- aren't they lovely and bright! And they have some very practical suggestions for saving water too :) 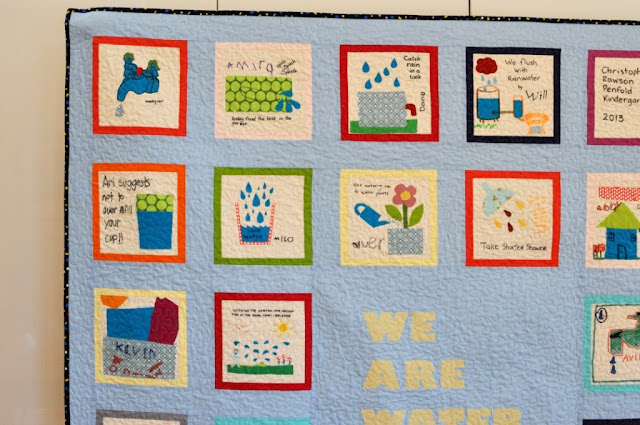 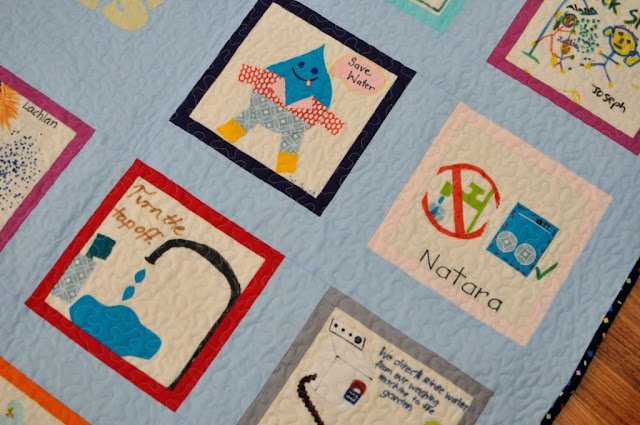 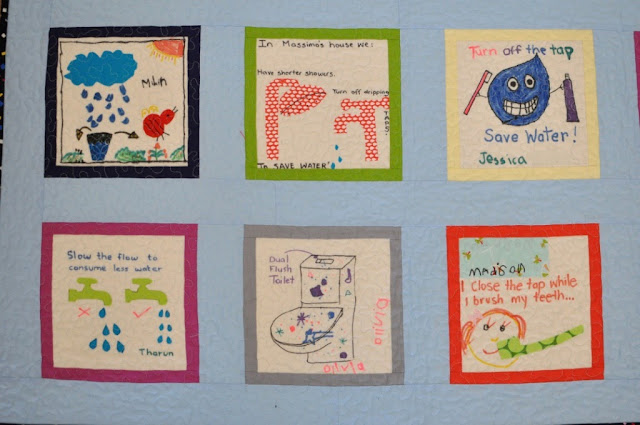 To make it even brighter, I added 0.5" colourful borders to each square and then 2" sashing.  For the words in the centre I enlarged letters on the computer, printed and cut them out, and then used these as templates. Double sided adhesive was used to attached the yellow letters to the centre square. In hind sight it may have been better to use a darker colour for the words, but I'm still happy with it. 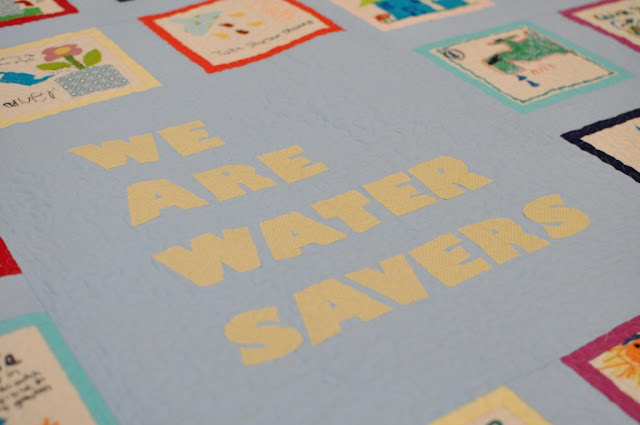 Instead of sewing around each of the fabric shapes to secure them (that would have taken forever!), I quilted heavily in an all over meandering design. 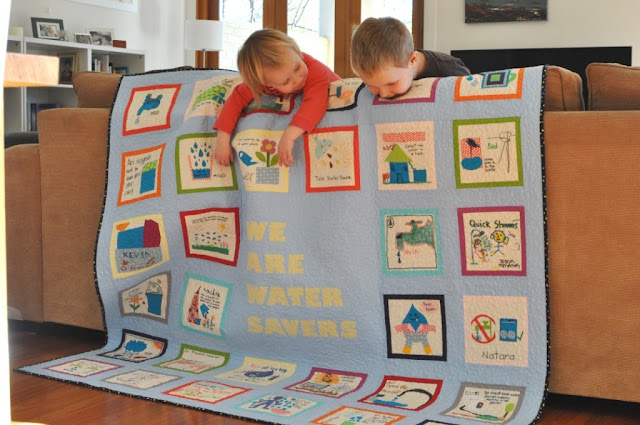 You can see the stippling better in this photo. I had a few late nighters quilting this one, so a piece of chocolate (or three) each time I changed the bobbin was a necessity (and I must say, it was a great chocolate hiding spot!) I'll just clarify that the chocolate is not actually inside my machine, it's under the extension table. 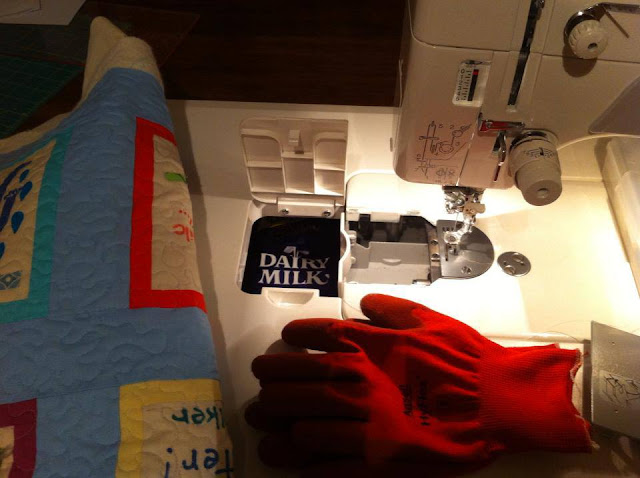 I tried to involve the kindergarten as much as possible each step of the way, so they would feel it was their quilt. The children helped me to arrange the blocks for the quilt top. Then I brought in my sewing machine and sewed some of the quilt top together while they had a go on a toy sewing machine. Later on while I was hand sewing the binding I brought in some squares of hessian, blunt needles and perle cotton and we sewed together.

It was lovely being involved with the kindy and being able to share what I love. Dane was shocked when I told him that not every mum has a sewing machine. He asked, "But how do they sew their quilts then?"

The kindy seem to love the quilt and each time the children see it they excitedly point out their block. We have been invited to the quilt hanging party next term, so that although Dane is moving onto school in a couple of weeks, he'll get to enjoy one last visit with all of his old friends. 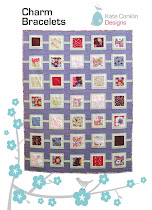 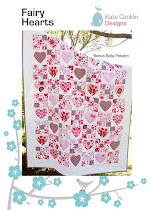 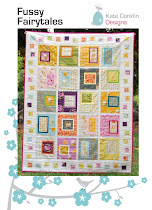 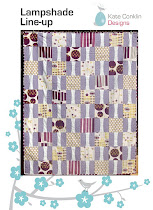 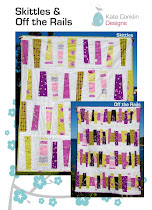 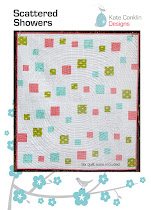 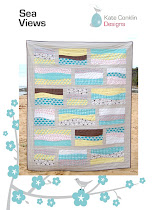 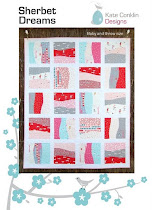 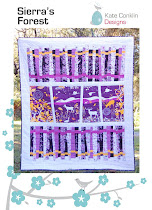 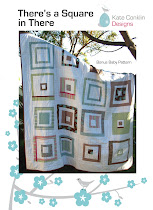 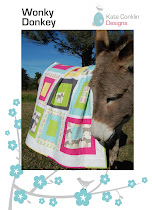